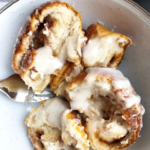 I just have to warn you these air fryer cinnamon rolls are like little bombs of gooey cinnamon roll goodness. They are soft and pillowy on the inside with a delicious cinnamon roll filling and then crispy and caramelized on the outside with a cinnamon sugar crust. Air fryer recipe testing week at More Momma just hit a high note. These air fryer cinnamon roll bombs have been coined the best thing I have ever made in the air fryer by my family.

I was so excited when I was testing this recipe because I had one bite and knew it would be a huge hit. Theses cinnamon roll bites were the perfect combination of textures and flavors.

These cinnamon roll bombs have a gooey cinnamon filling, a soft, fluffy interior and a crisp caramelized cinnamon sugar coated exterior. Then we drizzle them with a delicious, velvety vanilla bean glaze.

The best part about this recipe is it’s so much easier than regular cinnamon rolls. These air fryer cinnamon rolls also take a fraction of the time to make. And they are fun for kids!

No rising time, no rolling; just a simple assembly of a few ingredients and you can have warm, fluffy cinnamon rolls in a matter of minutes.

And if you don’t feel like the stereotypical cinnamon roll flavors you can change these up with different fillings. Don’t worry, I will give you all my best filling recommendations too! What is a Cinnamon Roll Bomb:

So what is a cinnamon roll bomb? It is basically a delicious fluffy roll stuffed with cinnamon and melted butter filling. They resemble a cinnamon roll in flavor and texture, but are so much easier to make and take a fraction of the time.

With the help of the air fryer they get a crispy crust on the exterior as the sugar caramelizes, but stay soft and fluffy on the inside.

What I love about the recipe is you can make these in a variety of ways. If you don’t feel like cinnamon roll filling change it up with one of these fun, flavorful filling ideas. Make air fryer apple pie bombs or try an Oreo cookie bomb. How do I know my cinnamon rolls are done?

When I tested the recipe this was the only snag I ran into. I wanted the exterior to be golden brown, but didn’t want the cinnamon rolls to overcook. Finally, I landed on the perfect time and temperature!

Cook the cinnamon rolls at 350 F on air fry mode for 12 minutes. Remove the air fryer basket and finish them off with the glaze. They with be perfectly cooked!

I was debating wether to add a glaze or an icing to these rolls and I am so glad I went with the glaze. It added another delicious element to these air fryer cinnamon rolls. If you like a thicker icing try a cream cheese frosting like I make in my no rise cinnamon roll recipe.

This recipe is made with a quick and easy powdered sugar glaze. You may already have all the ingredients to make these rolls! Here are the simple ingredients you will need. Keep in mind that if you want to fill your air fryer cinnamon roll bombs with different fillings, adjust the ingredients accordingly.

Refrigerated Canned Biscuits: I like to grab a good quality canned biscuit. I would NOT recommend the flaky biscuit brands for this recipe. I grabbed my canned biscuits from Trader Joe’s, but I also really like Annie’s canned biscuits or Pillsbury Grand Buttermilk.

Butter: Grab a good quality butter. It really makes the difference in flavor. I only buy Kerrygold butter now. It actually tastes like butter! And Walmart sells it for the cheapest price.

Brown Sugar: Use light brown sugar for this recipe.

Ground Cinnamon: I love buying my ground cinnamon in bulk at Costco. I go through it so quickly and it’s good quality.

Powdered Sugar: Nothing special about powdered sugar. We will be using it to make our glaze.

Milk: I like to use whole milk for our glaze. It gives the glaze a beautiful richness.

This post may contain affiliate links where I can earn a small commission. Thank you for supporting the blog and our family.