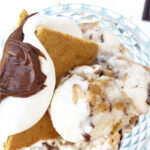 Summer time screams Smores and this gelato is jam packed with delicious smore flavors plus a little extra with rich and creamy nutella. This delicious homemade S’mores Nutella Gelato is perfect for warm Summer nights.

I am making all your smore ice cream dreams come true with this recipe. It technically isn’t ice cream, it’s gelato.

I get asked a lot “what is the difference between gelato and ice cream”?  I am going to answer all your questions about gelato and give you a pretty tasty smores gelato with nutella recipe to try out for yourself. But first let’s learn how gelato came to be.

*This information is from my pastry class I took during culinary school in Florence, Italy.

The oldest form of ice cream is the sorbetto.  Back in ancient times in Asia and the Middle East people would mix fruit juices with snow.  The earliest milk based ice cream dates back to China about 3000 BC when a milk and rice mixture was frozen by packing it into snow.

There is some controversy with modern day gelatos exact inventor but most people would agree it was credited to Bernardo Buontalenti, a native of Florence, who delighted the court of Catherina dei Medici with his creation. The Italian word for ice cream is gelato. But don’t get too confused because there is a different.

Gelato was regularly served at the Medici court in Florence at the time that Catherine De Medici married the King of France in 1533.  She had an amazing array of gelato chefs, Buontalenti being one of them.   She has said to be the one to introduced France to the decadent treat.

Italians take pride in making their gelato with high quality ingredients that provide energy to fuel them.  In Italy gelato is considered a healthy snack. They eat it in moderation and don’t add any artificial flavors and preservatives.  They literally eat it every day.  And I did too when I lived there, okay maybe I ate it two times a day. The smores gelato recipe is a spin on two of my favorite gelato flavors in Italy; nutella and cookie.

The differences between gelato and ice cream:

There are a few distinct differences between gelato and ice cream.  Gelato is made with less cream, less eggs (sometimes no egg) and is served at a little higher temperature than American made ice cream.  It is also supposed to be churned slower to incorporate less air which gives it a very smooth, velvety texture (this is called overrun).

Overrun is the amount or volume of ice cream obtained after churning that is in excess of the volume of the base.  It is actually the amount of air incorporated into the mix during the freezing and churning process.  A 100% overrun would describe a custard that has doubled in volume during freezing.  This is the maximum overrun allowed by the FDA.  While some overrun is necessary for a smooth and light texture, too much will give the ice cream an airiness and a less intense flavor.  A dense ice cream, such as the Italian gelato has a lower percentage of overrun than an American made ice cream thus creating a texture that yields a high intensity of flavor.

Overrun is determined by:

*The amount of custard in relation to the freezer size.  For maximum overrun, the freezer should be filled only halfway.

*The ingredients in the mixture that affect its ability to increase, for example eggs.

In conclusion, whether you are a fan of gelato or you prefer American made ice cream, making it is as easy as making ice cream.

How do you store gelato at home?

I store my gelato in plastic soup containers or freezer containers.  You can also buy these ice cream containers as well.  -You want to store the gelato in your freezer and make sure it is in the range of 0-10 degrees F.

How long does gelato last?

Most people will tell you if you make gelato at home that it can be stored for months.  Some people say up to 6 months, but lets face it it just isn’t as good the longer it is frozen.  I recommend eating it straight from the bowl (haha) but if you have to freeze it I recommend eating it within a couple of weeks. I promise though it won’t last that long!

Why is my gelato icy?

Ice creams have higher fat contents which help them to freeze better and be very thick and creamy.  Gelato has a higher proportion of milk (higher water content) which can cause the gelato to become icy.  I recommend making gelato and eating it as soon as possible.  It is also meant to be served at a slightly higher temperature so if it is very icy place it in the fridge for 10-20 minutes before serving to raise the temperature.

No, most gelato do not contain any eggs at all, but some recipes do call for egg yolks.  The one below does have egg yolks.  The process includes heating the egg yolk, but if you are pregnant or have dietary restrictions I would use a recipe that does not contain any eggs at all.  If you are looking for an egg free option check out this Ice Cream In A Bag.

Do you have any other ice cream or gelato recipes?

Yes! You can check out the recipe links below. –Ice Cream In A Bag– Dairy Free Mint Oreo Ice Cream.

How to make Smores Gelato:

I highly recommend enjoying this gelato immediately. If you freeze for long periods of time leave out at room temperature for 10 minutes for desired texture.